From sloping masonry to a zinc standing seam façade

The new Amphion Theatre in Doetinchem opened its doors in 2010. It is a truly prestigious building, especially considering the theatre has been named Theatre of the Year four times since then. Unfortunately, the cultural company had less luck with the sloping brick façade, which caused architectural problems. After a period of consultation, it was finally decided that the masonry would be replaced with a zinc standing seam façade made from NedZink NOVA.

Research on the existing façade showed that the architectural problems could be solved by choosing a different type of façade material, says Friso van der Steen of Mecanoo, who was responsible for the initial design of the building. “In 2019, we were called in to help think about the new façade. Our idea was that a natural material should be used. Unlike many artificially coloured materials, which often deteriorate with age, zinc has a beautiful ageing process. The material actually becomes more and more beautiful and brings the façade to life thanks to the small colour nuances. For example, we covered a school in Silvolde with zinc 30 years ago, and that façade still looks wonderful.”

MAKING THE DESIGN “MAKEABLE”
Amphion ultimately chose NedZink NOVA itself and got the right partners involved in the project. “Our management and the Amphion management agreed to replace the façade as a joint project,” says Peter Spijkerbosch of the main contractor, ADS Groep. “Solid agreements were made, which was a great starting point, especially considering the nature of the work to be carried out.
As the main contractor, we were initially tasked with taking the new design of the zinc standing seam façade and developing it in collaboration with the implementation architect, IAA architecten, Ridder Skins for Buildings and Brons constructeurs to prepare the permit application. This was with a view to developing the drawings at implementation level and to start the demolition work in October 2020. The complete outer shell up to the waterproofing was removed. An additional sub-construction, anchored to the main supporting structure through the existing waterproof layer, was then fitted as a rear construction for the zinc standing seam façade.”

EXPERTISE
Ridder Skins for Buildings spent more than six months installing a total of 3,000 m2 of NedZink NOVA standing seam façade in three different widths. “We needed this variation to ensure we had an optimal fit of the seam bays around the “randomly” fitted frames, which were retained from the initial design,” explains Dennis Reek of Ridder Skins for Buildings. “It also results in a playful façade image. The seam bays were prepared in the workshop, bundled in crates, and transported to Doetinchem. Then, every seam bays was custom-made, shortened and seamed on location.” Craftsmanship at its finest. “All the corners had to flow smoothly into one another. The fact that the building could not be put in scaffolding, together with the sloping façade, presented an additional challenge. The complete zinc façade was therefore assembled via a mobile work platform. And it was done under the critical eye of many spectators, right in the centre of Doetinchem.”

The end result appeals to the imagination. “An independent consultancy and inspection agency continuously monitored the renovation process. After final completion, we were able to issue an insured guarantee on the NedZink NOVA standing seam façade. This provided extra certainty for the Amphion Theatre,” concludes Spijkerbosch. 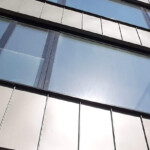